In a previous chapter about Sudan, I wrote about finding the nomads in the desert, but there wasn't just one nomadic encampment, there were two, and the second family greeted us just like the other -- first with suspicion and then eventually with smiles, probably because they were told in pigeon Arabic by our guide, Laura, that we had come with gifts.  Then there were the nomads on camels who had traveled with their herds from afar to reach the communal well and stock up on water to quench their animals and themselves. 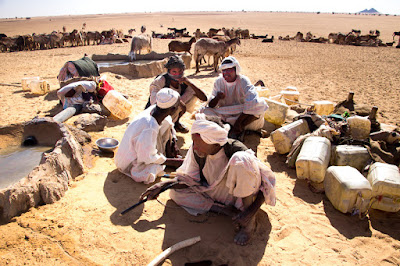 Picture this.  We are driving in the desert without anything significant to look at except blowing sand when we come upon what looks like a scene straight out of The Bible.  There were men wearing turbans and long white robes, stained ruddy from the red wet clay, working hard to fetch water from the well.  We also saw women and young girls working too, typical of gender assignments in Africa. 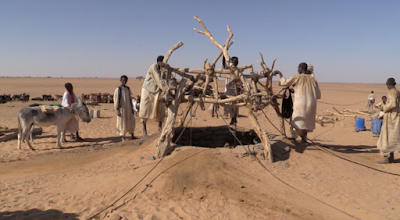 This is how they got their water.

A large bag made of animal skin and attached to a rope was lowered hundreds of feet down into the well until it reached the water table. The other end of the rope was stretched over a pulley at the top of the well and attached to a team of two donkeys.  When the bag was full of water, the handlers steered the donkeys quite a distance away from the well, pulling the heavy bag to the surface for the men to grab and distribute the water in various vessels for both animals and humans. 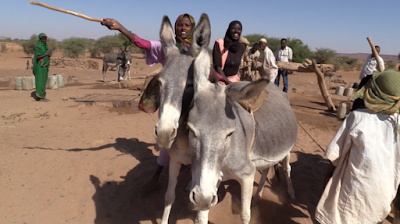 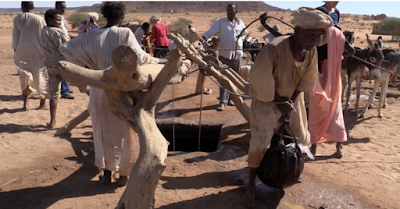 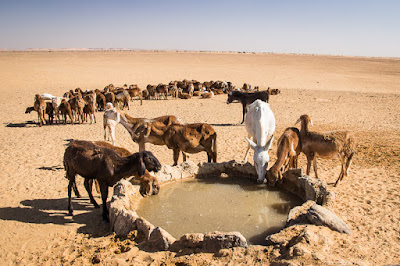 Although our visit was relatively short, the nomads must have been there all day.  They looked tired.  While some men worked, others rested, a few smoked cigarettes and most seemed to enjoy our visit.  Some even posed for pictures.  Young girls driving the donkeys yelled in high-pitched voices and used a switch on their behinds to get the beasts of burden moving.  There were camels, goats, sheep and, of course the donkeys.

Fortunately we came upon two wells in one day, a good distance apart.  The setting was much the same at each, but photography at one was hampered by the fact that in almost every scene someone from our group stood in the way, trying to capture an image of the same thing.

The last few days in Sudan flew by.  Before we knew it we were shaking the fine sand out of our smelly shoes and getting ready to head back home.  Most people in our group had god-awful connections that had us waiting for hours in remote places to change planes in the middle of the night.  I will never forget the vivid sights we saw in those last days in Sudan because they were unique and exotic in today's modern world.

If you would like to see my five minute slide show (with music), click on this link.  TIMELESS SUDAN