IRELAND: THE PEOPLE, THE LANDSCAPE, AND DRIVING ON THE LEFT

"Take us to the Croke Park Hotel," we asked the cab driver who was first in line to take a fare, and he whisked us away, talking continuously about places we must go and things we should see during our two days in Dublin, like Trinity College to see the Book of Kells.   "Drink a pint or two at the Brazen Head Pub," he said,  "because this is the oldest pub in Dublin.  You'll hear great stories told through music, and maybe you'll meet a faerie folk or two."

Even though we used the Hop-On-Hop-Off bus for transportation throughout Dublin, we took cabs as well.  Every cabbie, without exception,  took great personal interest in us, asking why we were in Ireland, and what we planned to do.  The cabbie who drove us to pick up our rental car told us about great places to eat along our driving route, but he endeared himself to us when he sang a song (with multiple verses) about a nostalgic time in 1962, and then gave us each a bear hug when we said goodbye.   Knowing the congeniality of the Irish, I bet if we'd stuck around another day, he would have invited us home for supper.  We were clutching our sides laughing when another cabbie bragged about his upcoming trip to Vegas while his wife travels to Hungary for a breast reduction procedure.


In addition to cabs and busses, we walked many miles combing the city streets, seeing the sights and looking for unique places to eat and cozy pubs for drinking and listening to live traditional music.  Our favorite pub turned out to be the popular Brazen Head because the music was very authentic, but we also enjoyed lunches at The Bank and the Lion's Head Pub.  We also checked out the night life in the Temple Bar area (a bit like Bourbon Street in New Orleans), listening to music, drinking Guinness and Bruce's favorite, Franciscan Rebel Red.  I even met a faerie.


How many Californians does it take to drive in Ireland?

The answer is four --Fred and Bruce in the front seat navigating and driving on the wrong side of the road (i.e. the left with the steering wheel on the right), and Lynne and Pam squeezed together in the back seat yelling  "Waaaatch out, you are toooooo close to the edge," or "Oh, my God, you almost hit that car."  Fred and Bruce got the hang of driving on the left fairly quickly, but we sucked a lot of air when meeting oncoming cars, trucks and buses hugging the center line of a narrow road.  Actually, we were hit twice when one crazy guy passed us going downhill on a narrow curvy road, and another time a young woman rear-ended us when we slowed down to follow a cyclist riding in the road.  We stopped both times but fortunately for all concerned, there was no damage to any of the cars. It seems our GPS lady found driving in Ireland a challenge too, but that didn't have anything to do with driving on the left.   Although we always plugged in the right information, she often had us going in the opposite direction or driving around in circles.  Often we'd shut her up, and use road signs, which weren't always helpful either, and our map didn't show the detail of the smaller roads, only the major highways.

On Day One out of Dublin, we pulled into the small town of Kilkenny about 5 pm, but we didn't find our hotel (The Pembroke) until way past 6.   The GPS lady seemed to be in another country or on vacation so she made matters worse, but the sign for the Pembroke was also very small, making it almost impossible to notice.  In fact, we passed the hotel several times before we finally saw the sign, and that's only because the guys gave in to Lynne's and my pleading to ask someone for directions.  As it turned out that person happened to be an American who was trying to get his car out of a locked parking lot.  Fortunately,  a local fellow heard us and directed us to the hotel.


If you love castles, then Ireland should be on your bucket list because every city, town, and village seems to have a castle or at least a ruin that might qualify as a castle, like the Rock of Cashel.   Other famous castles are the Bunratty, Blarney, Dunguaire, Cahir,  Ross,  Dunluce, etc.   My favorite was the Rock of Cashel, which is not a castle per se, but it is definitely one of Ireland's most historic sights.  I especially loved photographing the cemetery there.  In fact I took pictures at many cemeteries during our trip.   What is it about cemeteries that speak to me visually?


Although many kids in my hometown came from Irish descent, I really didn't know much about Ireland until I met my close friend, Helen Cassidy Page, whose mom and dad were born there.  In my youth no one seemed interested in their heritage, myself included.    After several trips with members from her family,  Helen published a beautiful historical novel entitled The Equal of God about Irish life in the 1800s before and during the potato famine.  (Click on title to find her book on Amazon).   Her evocative novel helped me appreciate Ireland's history in the context of my own trip, so when I stopped in Charlestown, the village where her father was born, I felt goosebumps, especially when I learned from a resident on the street that the Cassidy's lived just around the corner.

Wow!  Everything is so green.

In addition to the many kindnesses of the Irish people, what makes Ireland so special are the varied and beautiful landscapes.  My courses in landscape photography were not a waste of time.  I returned home with 1800 photos on my SD card, which are taking a long time to sort through.  I had many favorites viewpoints, but the Gap of Dunloe, where we took a horse and buggy ride with charming Kevin, had to be one of the most beautiful. Walking along the Giant's Causeway in Northern Ireland is also high on the list.   I loved the historic monastic settlement of Glendalough, and the scenic Wicklow Mountains, where we photographed a wild mountain goat staring at us from the the peat bog on Military Road just over Sally Gap.


The prolific yellow bush called furze in Ireland but Scotch broom here at home, bloomed prolifically and the predominance of the bright yellow weed made for a stunning contrast to the green hills, the blue water, and the often white puffy clouds.  Yes, white puffy clouds because the weather in general was pretty nice, some cloudy but dry days and even days with sun. While the iconic Ring of Kerry was a lovely drive, we enjoyed the Dingle Peninsula more, most likely because the day was sunny.  We saw a gazillion sheep grazing on the verdant hillsides or free range along the road.  It is the color of paint on the fleece of the sheep that distinguishes one owner from another.   As a dog person, my thrill was watching well-trained border collies herd sheep scattered all over the hillside into a tight pack and drive them quickly into a pen below us.  The farmer told us that sheep respond to the dogs as if they were wolves, a basic instinct in sheep that forces them to pack together for protection.  There is something about watching dogs do what they were bred for that brings tears to my eyes.   Visiting a sheep farm was a touristy thing to do, as evidenced by the number of big tour buses parked at the farm we visited.  We were packed together with a hundred or more tourists who rode in those behemoths, but it didn't matter.  We still enjoyed the event. 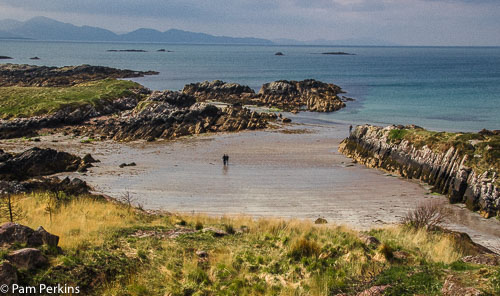 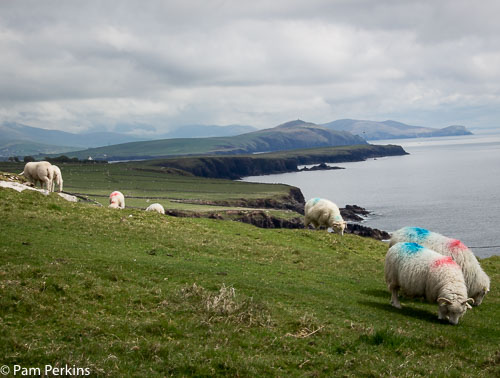 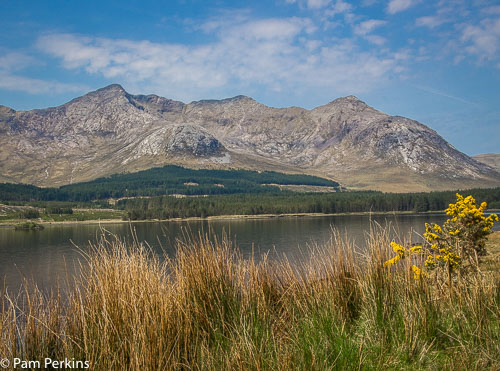 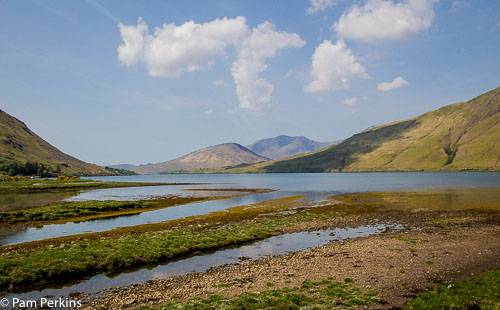 We were looking forward to exploring an unusual geological area called The Burren, but that's when our rental car, a Renault SUV, broke down.  Fortunately, we had arrived early at our B&B and unloaded our luggage before setting out on a drive in the boonies, where no one lives and there's no cell phone coverage either.  I'll leave out the details except to say that the car's gearbox died, and the only functioning gear was first and that didn't get us far very fast.  When we finally made it back to the B&B, a charming place called Fergus View, the owners, Mary and her husband Declan, helped us deal with the bureaucracies of a rental agency, and after much pleading, we found a new rental car in the driveway of our B&B when we awoke the next morning.   Just as they promised, the new car was delivered from Dublin in the middle of the night on a flat bed truck, but honestly, after all the different people we had to talk to, we had our doubts it would happen.

Another favorite place was the lively town of Galway, probably because it was artsy and had youthful energy. The highlight was coming upon the Galway Street Band with its thirteen animated young members playing lively music on a variety of instruments, including a washboard, several guitars, a banjo, saxophone, accordion, trumpet, ukulele, and a box drum, also known as a cajon.  Their music wasn't really Irish, but rather a combination of jazz, rock, some blue grass, and maybe a little world music tossed in here and there. Whatever you call it, we loved it--as did the enthusiastic crowd that filled the pedestrian-only intersection.


An amazing thing happened in downtown Galway when looking for a place to park.   Bruce saw a space and quickly paralleled parked into it, but then we all noticed that the curb was painted yellow. Surely this meant something, but we weren't quite sure what.  A man in one of the stores said that this was not a parking place, but at that exact moment, a woman, officially-dressed in a pressed white shirt and black pants, marched up to us with paper in hand as though she was planning  to write us a ticket.  Bruce quickly told her, the traffic warden, we were moving the car, but she surprised us and said it was O.K. to park there.  "Do you have one Euro 90?" she asked Bruce, and it just so happened that he had the exact change, which he handed to her.  She took the money and disappeared around the corner, while we waited wondering what was going on.  When she returned, she handed Bruce a paper receipt and said, "Put this on your dashboard, and stay as long as you want.  Just enjoy our town, and have a good time."  Yes, amazing!  She even let me photograph her with Bruce, but after the photo,  she began writing tickets on the other cars parked next to ours. 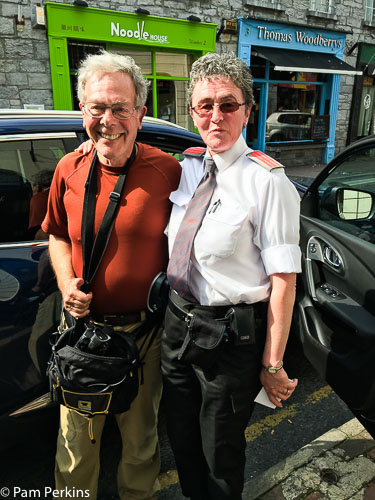 Contrary to what some people told me, Ireland has really delicious food.  I couldn't resist the thick slices of home-made soda bread smeared with soft Irish butter, and the warm scones with a touch of berry jam and a dollop of whipped cream went perfectly with my afternoon cup of tea.  Since returning home, I've had to change my eating habits.  There's no soda bread with Irish butter, and I gave up drinking a pint of Guinness daily.


Stay tuned. The adventure continues in Norway next month.

Posted by Pam Perkins at 9:33 PM No comments: