WHY I RIDE A BIKE


A little more than 18 years ago I was about to turn fifty.   It was not a pretty picture.  I was getting older and needed to do something about my sagging muscles and my mental fatigue from a stressful job.   I found an old bike in the garage I hadn’t ridden in many years, but after a little spit shine and some elbow grease,  I went for a short ride around the block and was relieved I didn’t crash.  I rode eight miles and decided to ride the next day and the day after that.   A few months later I bought a new bike, a sturdier helmet and some stylish spandex,  joined a bike club, made new friends, rode a metric century, then another, took an international tour, and became a cyclist. 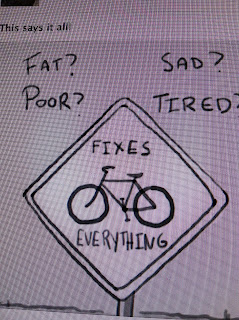 Before I rode a bike, I didn’t know I had it in me to be athletic.  I flunked softball and field hockey in high school.   I didn’t know I could be anything I wanted to be and that’s how biking changed my life.  In my early forties I was diagnosed with fibromyalgia.  My joints ached and I hurt most of the time.  Walking 18 holes on a golf course was impossible.   Eventually I was put on some new medication and with that I gained some self confidence.  I wanted a new life, so I started to push myself, have fun, and exercise.   Then I found the old bike in the garage and the rest is history.    For years I was a weekend warrior and now I’m considered hard core.   Eighteen years later I have ridden my bicycle thousands of miles in some beautiful places,  like the South Island of New Zealand, Hawaii, the national parks of Utah, the challenging Oregon Coast and parts of bucolic New England where I grew up.  My body feels good most of the time, I’m off the medication, and when asked, I say my fibromyalgia is no longer

Someone once asked me what was the most interesting thing that happened to me on a ride and this is what I said:


This is the story.  We were just dating at the time.  Wanting to be my constant companion, he bought a bike, a helmet, spandex, the whole fancy retail package.  One day after a wonderful ride together out in the country,  I discovered after we got home that I had left my front wheel by the side of the road after loading the bikes in the car.   We quickly drove back to where we had parked, but the wheel was gone.   I was really upset because wheels are expensive.  When I went to my bike store the next day to buy a replacement, the clerk said,  "A nice man called ahead and gave us his credit card to pay for your new wheel."   This gesture showed a kindness that was totally unexpected but truly appreciated.   Two years later we were married and his kindness remains today.

When I am on my bike, I easily focus on everything around me -- the beauty of being outdoors, how the air smells, the cool breeze blowing on my cheeks, the clicking noise my gears make, and the silence that comes with riding on quiet country roads.  The feeling is hard to describe without sounding cliche.  I wouldn't call myself an athlete, but I love feeling athletic, like the way my body works hard and is under my mental control.  I even like to sweat.  My legs are toned and my friends comment on my muscular calves but are nice enough not to ask me why I'm not faster.  Bike coaches say,  "Pretend you are wiping your feet on a mat and start pulling up at 4 o'clock."  My legs are like pistons, making smooth circles as I push and pull in the clips.  At the beginning of most rides my breathing is deep, loud, and irregular,  but after catching my second wind, my breathing is quiet, smooth, and shallow.  It's almost like I'm not breathing at all because I'm in the zone.   I'm conscious of my surroundings, but at the same time I'm in a meditative state of bliss.   How this happens I really don't know.  Maybe endorphins in the brain or something like that.


The best part of riding a bike is the feeling of authenticity, being my true self.  No judgment, no self criticism, just being free.   I love when I feel one with the bike and riding in the zone.