Did you know that an adult cat has 30 teeth?  Well, after spending a thousand dollars at the animal hospital,  my beautiful Tonkinese has only 24.  For almost an hour this morning I watched with fascination as the animal tech extracted three pre-molars that were infected and causing her pain, although, like most cats, she didn't give me any clues.  The other missing three?  Well, they were most likely vacuumed up from the rug or the floor some time in the distant past.

Indie, short for Indigo, is a platinum mink Tonkinese breed (a cross between Burmese and Siamese) with  aquamarine eyes, a thick coat of taupe-colored fur,  and a muscular build,  weighing in at a little over seven pounds.  She's the sweetest cat I've ever owned, although she can be quite demanding at times with a multi-meow vocabulary that says "Please feed me, I'm hungry" or "Love me, Love me, Love me."  Indie shares the many cat beds scattered throughout our house with her beloved litter mate, Sophie.  As they nuzzle and lick each other's faces and ears with unconditional love, I could sit and watch them for hours. 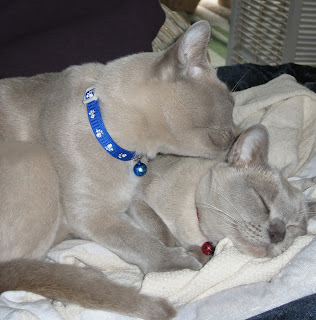 Tonks, as they are often called,  have been described as being very dog like, which,  for a true dog lover like me,  is a real gift.  It is not unusual for them to follow me around, whether I'm going up the stairs to grab my cell phone and then quickly coming down again to work in the kitchen or just walking from one room to another.   Very slowly they take the stairs one step at a time and then with gusto they race back down like they are heading for the finish line.   When we are having a dinner party, it's not a time for them to sleep.   Each cat selects the guest they think will love them the most, and once they have found a soft, comfy lap, they like to curl up and hang out.  Some times at the dinner table,  it is not unusual for one of them to jump up on the lap of an unsuspecting guest.  Often they are quickly shooed away, but we know of instances when no one has said, "there's a cat sitting on my lap."   If that someone is wearing light-colored clothing,  no one will ever suspect,  but if that someone is wearing a cat hair magnet color like black, then they are in for a hearty brushing with a sticky roller before they leave our house.


When Bruce and I took Indie to the vet a few months ago,  we learned that she had a significant amount of dental plaque and one tooth that had to be removed.  We were a little taken aback when we heard the estimated price of $650-$850 and possibly higher, depending on the extent of the extractions.  In our case it was a lot higher.   Fortunately,  we already had $450 in a kitty that had accumulated after years of an almost- nightly card game that we always play for money, except when we are on vacation.   Bruce taught me Spite & Malice when we first got together, and although I was not much of a card player, it was easy to learn and interesting because it is a game of strategy and luck.   The essence of the double-solitaire-like game is for each player to get rid of his or her pile of 26 cards,  and the person who loses has to pay 25 cents for each remaining card in their riddance pile.  Some times the losses only amount to fifty cents a game or maybe a couple of dollars, but if you can't get rid of all 26 cards, then the loser has to put $6.50 in the kitty.  It doesn't sound like much each night,  but after years of playing and one of us paying a nightly fine, quite a few dollars have been squirreled away.   The first time we had over $100, Bruce and I wondered what we would do with the extra money.   "Let's use it for the opera," I suggested, "or perhaps a night at a B&B. "   "Naw",  my pragmatic husband replied, "Let's use the kitty to help pay for the kitties' medical expenses," and that's exactly what we've done.  This form of self insurance we call the Kitties Kitty.

Adobe Animal Hospital is an amazing place in so many ways.  There are 24 veterinarians on staff and about 120 employees.   They have operating rooms for orthopedic and soft tissue problems, and several rooms dedicated for other types of surgeries and dental care, plus radiology, ultrasound and an ICU.  In addition to providing emergency and general services 24 hours a day, they have some of the most compassionate staff I have ever encountered.  As an example, they encourage the family of their patients to be with the animal during most procedures, including dental.  From their experience this helps put less stress on the animal and less stress on the family.   I've been told that there isn't another animal hospital that anyone knows of that encourages this.   For me it really was an education and gave me more insight into the skills and compassion animal health care professionals utilize in their daily work.   I stood along side the highly talented dental tech and watched her use the latest equipment and with her nimble hands make my little girl feel better and healthy again.    I can certainly understand why it's so expensive:  pre-surgery blood tests, anesthesia administered through intubation, heart rate and blood pressure monitoring, lubricants for her eyes that don't blink while she's under anesthesia,  and an x-ray before each extraction to determine whether there is a root surrounding the damaged tooth.  Prior to the procedure, they injected Indie with an analgesic so she would be ahead of the pain curve just a little bit.  In her case, they did a urinalysis because her kidney function, as noted in the blood test, was a tad high.  The results were negative but my veterinarian will monitor this on a regular basis.  After the delicate extractions, the dental tech cleaned Indie's remaining teeth with a high powered tool and finished by polishing with a gritty paste like my dental hygienist uses on me.    After she finished, Indie's teeth gleamed like tiny pearls.

"Do you ever work on your own pet's teeth?" I asked the dental tech who was working under my veterinarian's indirect supervision.  In a sweet voice that was a little muffled by the surgical mask she was wearing, I heard her say,  "With Indie, I think of her and love her as if she were my own pet."  Wow!  Her heartfelt response gave me the comfort I required to know that my little girl was feeling double love on a day when she needed it the most.

So, Indie is in our living room now and sleeping in her small carrying case with her devoted sister Sophie curled up by her side.  The metal case lined with soft fleece seems to provide some security, and thankfully doesn't remind her of how she travels to the animal hospital.  I hope she will forgive me over the next three or four days when I have to squirt some awful tasting medicines down her throat.  As unpleasant as these drugs may be, they are absolutely essential to alleviate her discomfort and to prevent infection in the days to come.