"Hey, Pami," Bruce called out to me as he was leafing through a Wilderness Travel brochure about a trip to the Philippines, "What do you think of this?"  He continued reading out loud.  "Pristine beaches, soaring limestone cliffs, miles of spectacular coral reefs and opportunities to swim with whale sharks."     Whale sharks?"  I questioned.  "Won't that be dangerous?"   The first part of the trip's description brought back vivid memories of beautiful white sandy beaches when we visited the Maldives, and I won't forget the jaw-dropping sunsets from sailing in  the Caribbean.  However,  swimming with whale sharks was another step closer to the edge, which was happening more often with adventure trips to tribal Ethiopia, exotic Papua New Guinea, and the endangered Arctic in the not too distant past.   After realizing that this could be a very special trip,  I said,  "O.K. I'll be a good sport and take another look."

Six months later we packed a few clothes, our wetsuits, fins, snorkels and masks, and with seven adventure-seeking friends, we flew to the Philippines to spend two weeks in Palawan,  a stunning archipelago in the heart of the Indo-Pacific Coral Triangle, which is the most biologically diverse marine region in the world. 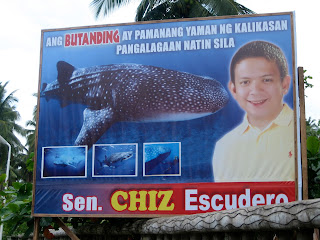 After a rest day in Manila, we flew to Luzon Island to visit the fishing village of Donsol, which is often called the "Whale Shark Capital of the World" since it has the largest number of recorded sightings of whale sharks anywhere on our planet.  Known locally as buntanding, whale sharks are the world's largest living fish, and while they are rarely seen in groups, they come to the Bay of Donsol in the spring and congregate in the shallow coastal waters to feed on plankton.


Swimming with whale sharks is definitely a unique experience of a lifetime, but I admit that initially I was not sure I'd have the courage to do it.   Snorkeling with playful sea lions in the Galapagos sounded intimidating too, but after a few minutes in the water,   I became so involved with them that whatever fear I had seemed quickly to disappear.   The whale shark expedition was similar in that once I jumped in the water, there was no fear , but this experience was different because it required good swimming skills to keep up with the fast moving whale sharks, and a strong body to pull oneself back in the banca (Filipino outrigger) many times in the course of the day.

Our local Filipino guide gave us minimal instructions:  "Sit on the edge of the banca, so when we spot whale sharks, you can jump right in and we will guide you to them.  Don't worry.  We call them gentle giants.  They won't even know you are in the water.   They are here to feed on plankton, not on you."

We perched ourselves on the side of the boat with our masks tight to our faces, snorkels in our mouths and legs dangling off the side.   We waited for the guide's verbal signal.  After a few minutes and without any warning,  one of the guides hollered "Let's Go."   Without wasting a second, we bolted into the water, flailing our arms and legs, not knowing exactly what to do or where to swim.  I felt one of the guides grab my arm and pull me through the water.  I moved my legs as fast as I could, and suddenly there was a huge whale shark coming straight toward me.   She was  really big, about 35-40 feet long.  Within seconds I was swimming right above her head. 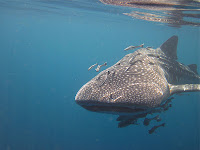 I could see her beady eyes located on the sides of her head, and her very large oval-shaped mouth was open,  so she could scoop up the plankton as she swam.  I started swimming very fast, in order to stay with her.   My excitement measured off the charts.  My heart felt like it was beating out of my chest, and I was very winded, but I wasn't scared.  I  kicked my legs as hard as I could until I was over her dorsal fin and within a minute she was gone.  It was over.  A much faster swimmer than I,  she disappeared beneath me. 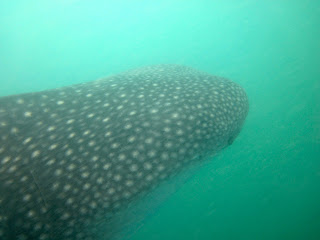 Three of us popped our heads out of the water, removed our  snorkels and yelled  "Did you see her?  Did you see her?" as if any of us could have missed her.  I reached for the boat's rope ladder, took off my fins and struggled to pull myself up into the Banca.   Everyone was "high fiving" each other and anxious to get back in the water.

While the boat quietly motored to another part of the bay, we renewed our positions on the boat's edge and waited for the signal that more whale sharks were in our vicinity. For the next few hours we were in and out of the water at least four or five times.  The procedure was the same.  We would dangle our legs over the edge  and wait for the call  before we jumped in.  Soon we were in the water following whale sharks again.  I only saw one at a time, but was close enough to observe their grace and the beauty of their dark gray bodies with white checkerboard spots.  We never felt nervous or scared -- only the exhilaration and thrill of a once-in-a-lifetime experience of swimming with the largest fish in the ocean, whale sharks.

All photos by our masterful guide, Lee Goldman 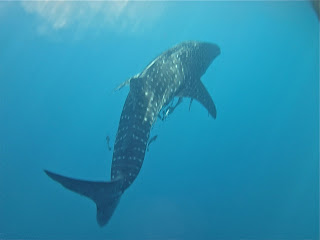 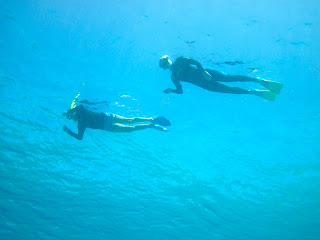 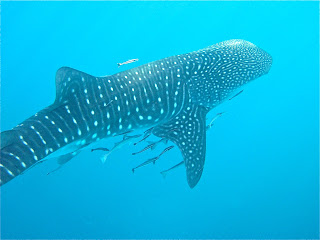 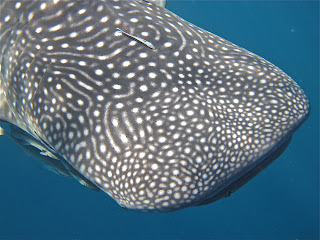