I WILL GET OVER THIS

On Friday I had a "come to Jesus" meeting with my revered physical therapist about my determination to return to the ride and pick up the group in Iowa.  She did not dump a bucket of ice water over my head; instead it was just lukewarm.  What I'm saying is that I wasn't totally surprised when she told me I would be taking a huge risk if I returned to riding too soon, especially to a bicycle that needs to be reconfigured to meet my needs and to an itinerary that is still hard core all the way to Northern Minnesota.  Deep inside I already knew that this was a decision I had to face but just wasn't ready to admit it to anyone, particularly myself.   She said that one or two bulging discs were serious enough, but three could put me in a queue for possible surgery down the line.  She said many of her patients require a second round of cortisone so there's always that as well.


So, having said all this, it won't surprise you to know that I have decided not to return to the ride after all.    This will probably come more as a shock to my doctor when I tell him tomorrow because he has become personally involved in my ambition, my longing to return, and his efforts to make that possible.   The injections are taking longer to kick in than I had hoped since it is now 5 days and I still have symptoms.  Carol said as long as I have numbness and tingling in the hands and fingers, the nerves are still being compressed.  My health comes first and there's always more riding down the road and other tours in my future.   So friends I will get over this and I won't be off the bike forever.


Yesterday I emailed my husband Bruce who is on his cruise and told many of my friends about my decision.  What surprised me is that almost every person I talked with seemed relieved to hear this news.  Loyal friends as they are, they had the good sense not to lecture me when I said I was going back, hoping, of course, that I would eventually come to my senses.


So, here's what I'm hoping to do instead, thanks to my always thinking ahead husband.  I will flly to Washington, D.C. next weekend and meet Bruce who will fly there from London to spend some time with his daughter and our grandchildren who live nearby.    After a few days with the family, we will take a little trip just the two of us.  Where?  We are not certain yet, but possibly New York City or Charleston, South Carolina or maybe somewhere else.   Stay tuned..........

PS:  I want to keep blogging because it's fun. I've also received positive feedback from people who seem interested in what I'm doing off the bike as well as on it. Of course, I hope you will read Biker Chick even if she's not cycling the Mississippi River.  I'll also write about some of our exotic travels around the globe as I've done in "Where in the World are you, Pami?"   Below are a few photographs taken during our trip to Ethiopia in 2009 when we traveled throughout this fascinating country and visited the exotic tribes of the South Omo region.  I traded this Womantours tee shirt for the red & black necklace this young girl is wearing around her neck. 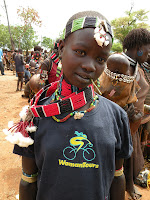